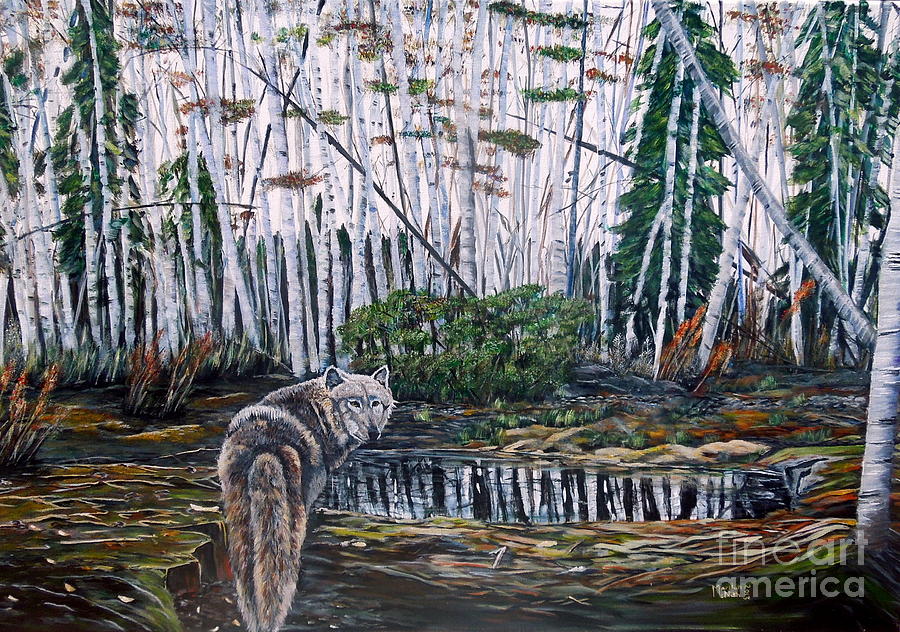 This piece has been already sold.   Please feel free to contact the artist directly regarding this or other pieces.

When a lone wolf is spotted in the wilderness it embodies the energy of freedom. When seen in a pack it embodies a sense of community. If wolf appears to you alone or in a pack it is asking you to acquire the same within your own life. In spite of their negative press wolves are actually friendly, social and highly intelligent.

The wolf's senses are highly developed. Their intelligence is marked with excellent hearing, sense of smell and strong feeling. They are determined as well as cunning and use these skills for the benefit of the pack. The howl of the wolf is primal and penetrating. They howl to find other pack members or to let wolves from outside of the pack know their territory boundaries. If you hear a wolf howl it might be telling you to stand your ground and defend your boundaries.

Wolf teaches you to have a balance between the needs your family has of you and the needs you have for yourself. They are totally loyal to the pack but do not give up their identity to the pack. If wolf appears in your life you are being asked to look at where you are being too dependent and where you may be too independent. In both family and community there needs to be a balance.
Wolves convey much with their bodies. If they are angry, they may stick their ears straight up and bare their teeth. A wolf who is suspicious pulls its ears back and squints. Fear is often shown by flattening the ears against the head. A wolf who wants to play dances and bows playfully. Their body language is symbolic for those with this medicine. Man also uses body language to convey messages. The study of this art can increase perception in those with this totem.
Wolves hunt in packs, relying on endurance to run down weak and older animals. They have been known to run 35 miles a day in pursuit. They are the epitome of stamina and strength. With an extremely well developed societal organization, they act together to hunt and raise their young. They do not fight unnecessarily and often go out of their way to avoid fighting.

Sometimes a growl, a glance, a posture is all that is necessary to determine dominance. Wolf teaches those with this medicine to know who you are and to develop strength and confidence in what you do.

Thank you Hanne! Your kind comments warm my heart! :)

Brava Marilyn! Your artwork is featured in Women Who Run With the Wolves.

Thank you so much Sora for the recognition and support!! Really appreciate it!

Thank you so much for your praise! I really appreciate it!

Love this work!! the reflection is great!!

You've made my day Praisey! Thanks! :)

What a luminous painting and the backward glance of the wolf is captivating!

Thank you so much Harriet! I appreciate your comments! :)

Thank-you so much for featuring "Looking Back", in the Paintings group, Krista!! I appreciate your support very much!

Thank you sooo much Jessica for featuring "Looking Back" in Nature From Around the World! So very honored! :)

Thanks so much Mariola for featuring "Looking Back" in Wildlife! So very much appreciated! :)))