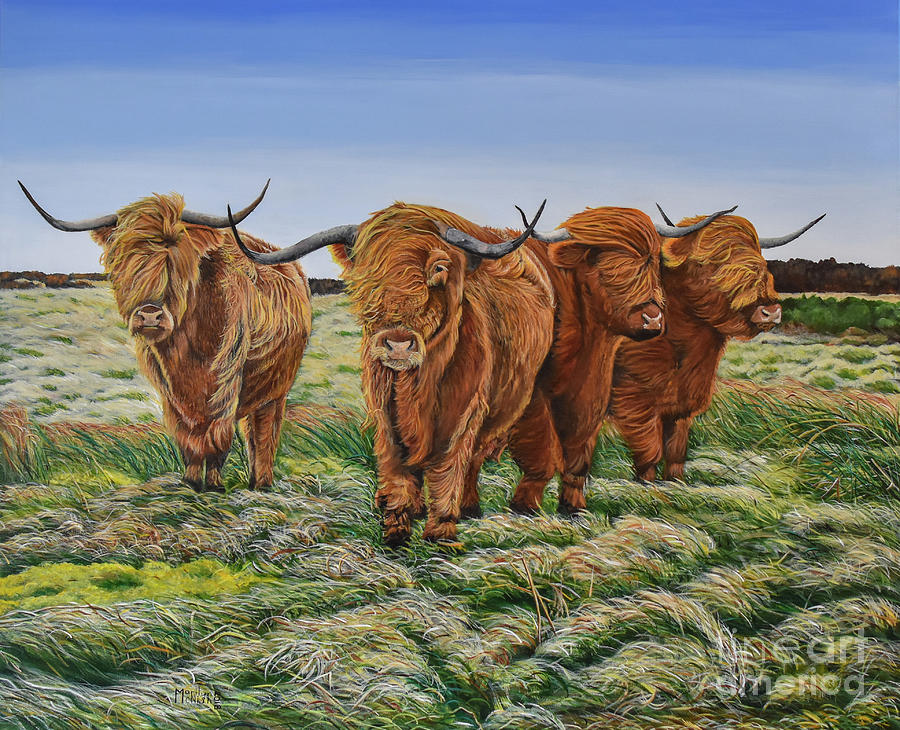 This original painting is currently for sale.   At the present time, originals are not offered for sale through the Marilyn McNish - Website secure checkout system.   Please contact the artist directly to inquire about purchasing this original.

Highland cattle are a Scottish cattle breed. They have long horns and long wavy coats that are coloured black, brindle, red, yellow, white, silver (looks white but with a black nose) or dun, and they are raised primarily for their meat. They originated in the Highlands and Hebrides Islands of Scotland and were first mentioned in the 6th century AD. The first herd book described two distinct types of Highland cattle but, due to crossbreeding between the two, only one type now exists and is registered. They have since been exported worldwide.

They are a hardy breed, having been bred to withstand the conditions in the Scottish Highlands. Their long hair gives the breed its ability to overwinter. Bulls can weigh up to 800 kilograms (1,800 pounds) and cows up to 500 kilograms (1,100 pounds). Their milk generally has a very high butterfat content, and their meat, regarded as of the highest quality, is gaining mainstream acceptance as it is lower in cholesterol than other varieties of beef.

I find these cattle fascinating! So bison-like! Interestingly, a group of Highland cattle is not called a herd, but a 'fold' instead.

Beautiful painting of this interesting breed.

One of your peers nominated this image in the 1000 views Groups Special Features #19 promotion discussion. Please help your fellow artists by visiting and passing on the love to another artist in the the 1000 Views Group....L/F/Tw

Congratulation.....your wonderful work has been featured in the 1000 Views on 1 Image Group ..... Please place your featured image in the Feature Archive and any other appropriate Archives l/f/p

Thank you Christopher for featuring my painting! I appreciate your thoughtful promotion!

Thank you Diana for your thoughtfulness and kindness!

Coming from such a masterful artist such as yourself, I am very honored for your thoughtful comments. Thank you!

Thanks Donna! Its one of my favorites too!

Magnificent painting Marilyn! These long hairs are also here in many places. L

Are they? I just love them Veikko and Thank you!

Thank you Linda for your kind comments!

Thank you very much Vishvesh for your kind comments!

Thank you so much Anne for your wonderful comment and support!

These guys got my vote in the women only contest !

Thanks so much Catherine for your support! :0)

Thanks so much Jim!

Thank you so much Lena!

Thank Hanne for your comments and support!

A big congratulations to you for being chosen as our 'SHOWCASED ARTIST' of the week for the Wisconsin Flowers and Scenery group. Your art works are very indicative of a professional, and it is a true honor to "showcase" your art pieces for this week in this new venue we are providing for our members. Thanks for your awesome submissions, and it is an honor to have you as a member of our family of friends and fine artists within the WFS group. Special thanks and congratulations from your administrator, Randy "Elvis" Rosenberger

Oh what wonderful comments and thank you so much for the honor! I am very appreciative of your support and enthusiasm for my artwork!

Fantastic work and portfolio! Congrats on your feature in the "No Place Like Home" group. l,f + following

Thank you! I appreciate your thoughts and comments!

Thank you so much Magdalena for this recognition, comments and support!

CONGRATULATIONS, Marilyn! You are the Artist of the Week in the fine art group, Old MASTERS--Painters and Traditional Arts! This is beautifully done!! v/f/feature, pin, tw, fb promotion!

Thank you so much Lenore for this wonderful honour, your gracious comments and support! You’ve made my day!!

Congratulations! Your skillful and interesting painting has been FEATURED on our homepage. Well done!

Thank you very much John!

Congratulations, your work is featured on the homepage of "Created by My Hands"

Thank you so much David!

Congratulations on your feature in Animal Mania

Thanks so much Lori for featuring "Windswept Highland Cattle!"