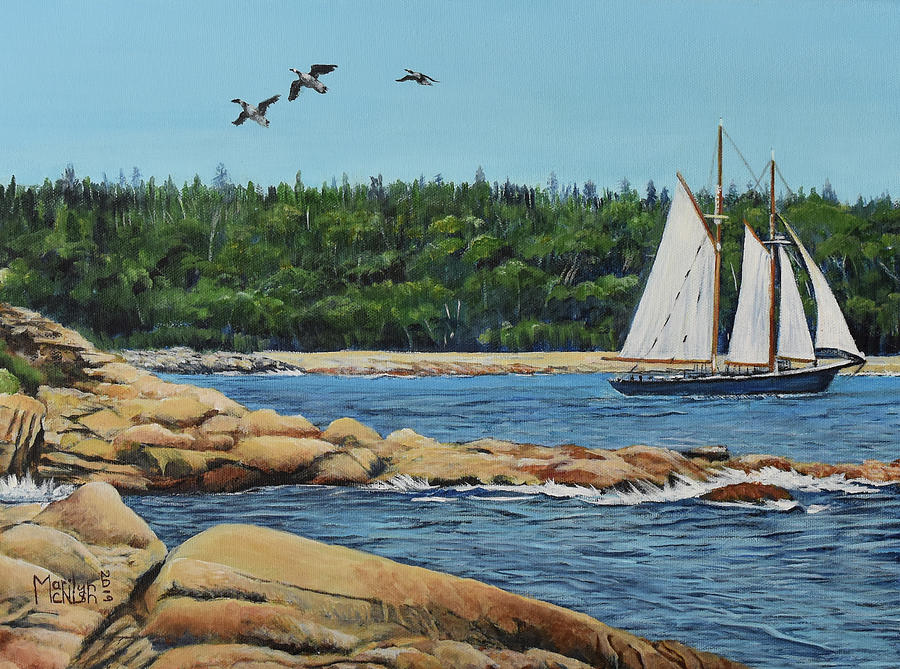 This piece has been already sold.   Please feel free to contact the artist directly regarding this or other pieces.

The Bluenose II is shown as outbound, heading to the Atlantic and away from Nova Scotia's reefs, and rocky shore.

Bluenose II - The legend reborn
Bluenose struck a reef off Isle aux Vache, Haiti on 28 January 1946. Despite the loss, the legacy and admiration for the once mighty schooner lived on in the hearts and minds of Canadians — especially Nova Scotians.
In 1963, Bluenose II was launched. It was built by many of the same people who had worked on the original vessel at the same shipyard in Lunenburg. The project was financed by Oland Brewery to advertise their products, while also promoting Nova Scotia's maritime heritage and tourism. William Roué, the designer of the original Bluenose, endorsed the vessel. Captain Walters sailed on the maiden voyage.
Bluenose II was gifted to the Government of Nova Scotia in 1971. It continues to serve as Nova Scotia's sailing ambassador — an enduring symbol of the province — living history under sail.

Many thanks to the following groups for featuring Bluenose II Sailing: World Landscape Lovers of Art, Created by My Hands and No Place Like Home.

Such a very fabulous piece of movingly calm art that is allowing a soul to sail in self to explore to find enlighten path to follow in life or beyond! Beautiful! :)

Thank you Tejsweena for your thoughtful and insightful comments!

Thank you Donna for your wonderful comments and support.

Thank you so much Jim!

Thank you Heather very much!

Thank you so much Hanne for your support and kind words!

Thank you Veikko for your kind words!

Congratulations! Your skillful and interesting painting has been FEATURED on our Homepage!

Congratulations, your work is featured on the homepage of "Created by My Hands"

Thank you so much David!

BRAVO! Your beautiful artwork has earned a FEATURE on the homepage of the FAA Artist Group No Place Like Home,7/19/2019! You may also post it in the Group's Features discussion thread and any other thread that fits!

Thank you so much Jenny for your support and recognition!