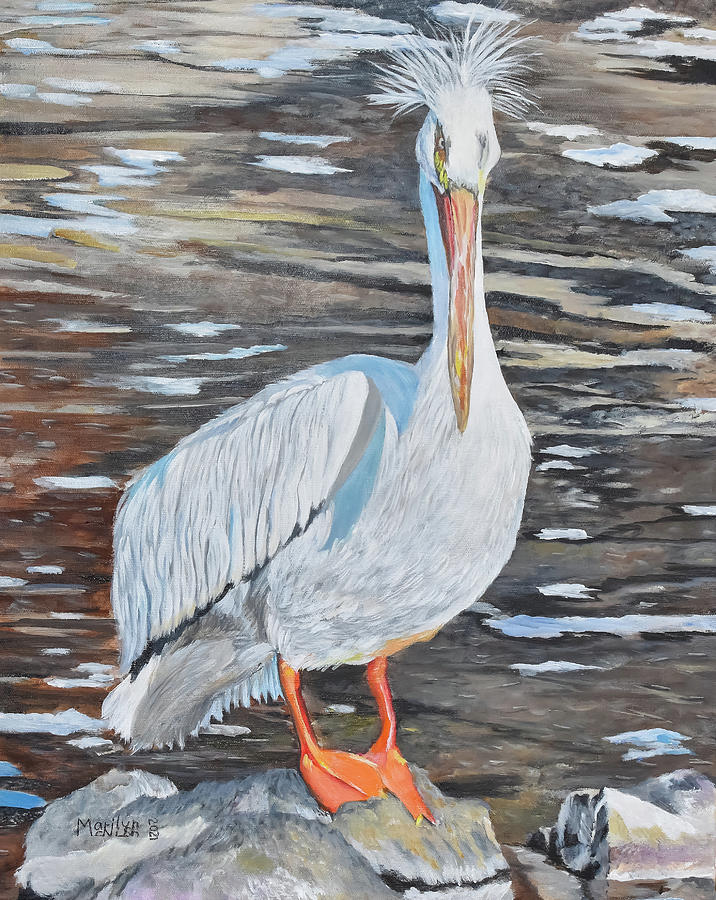 This original painting is currently for sale.   At the present time, originals are not offered for sale through the Marilyn McNish - Website secure checkout system.   Please contact the artist directly to inquire about purchasing this original.

At the base of Manigotagan falls, roosted a colony of Pelicans. As this fellow would squawk occasionally at another accompanier, it appeared to be a confident leader and overseer of the brood.

It was unusual to see so many pelicans gathering in this spot. We suspect in part it was because of the lack of rain, thus the convenience of so many rocks to rest ones bottom. Also the shallowness of water could possibly enhance their ability to catch food, was another assumption.

When I first spotted this guy, I instantly thought of of Boris Johnson. The Prime Minister of England. Mainly because of his messy hairdo of course. However even with his messy hair he appeared to be a stately and orderly fellow.

Many thanks to following groups for featuring, "A Pack Leader." : A Birding Group, Wildlife, Just Perfect, Wisconsin Flowers and Scenery, Created by My Hands, First Friday Gallery, Water Forms

This is such a gorgeous painting Marilyn, wonderful artwork! l/f

Thank you so much Carol for your gracious comment!

Thank you so much AnnaJo for reading through the long description and finding the same assumption! Your comments made my day! LOL

Congratulations, your work is Featured in "A Birding Group - Wings" I invite you to place it in the group's "2020-2021 Featured Image Archive" Discussion!! L

Thank you Don for featuring my painting, "A Pack Leader!"

Congratulations on your "Best of the Best" feature, Marilyn.

Thanks a bunch Susan!

Congratulations, Marilyn on your Feature in BEST OF THE BEST OF WFS FINE ARTISTS !

Thank you so much Kay!

Revisiting. Congratulations on your feature in WFS FL

Beautiful portrait of this Pelican.

Makes me smile! Congrats on your feature in WFS

Cute dude. Congratulations on being chosen Best of the Best in WFS. FL

Congratulations on your "Best of the Best" feature, Marilyn!

Congratulations on your Best of the Best of WFS Artists!!!! L

Returning to say Congratulations on your Best of the Best homepage Feature of the Week in WFS!!...L/F :)

Thank you Donna for your kind congrats!

Dear Wisconsin Flowers and Scenery Group Member, You are to be congratulated on your achievement of getting your beautiful piece of artwork chosen to be featured in our “Best of the Best” section of our homepage. This is truly an honor to be selected for this special feature. If your works are featured, it is always an honor, but this honor is above and beyond what one sees most of the time. It is excellently done and presented and deserves a special place on our homepage. Happy sales to you till we meet again.

Thank you so much Randy for your kind and gracious recognition, comments and promotion!

Thank you Hanne for your wonderful complementary and descriptive comments! Made my day!

Congratulations, your work is featured on the homepage of "Created by my Hands

Thank you Donna for your wonderful comments!